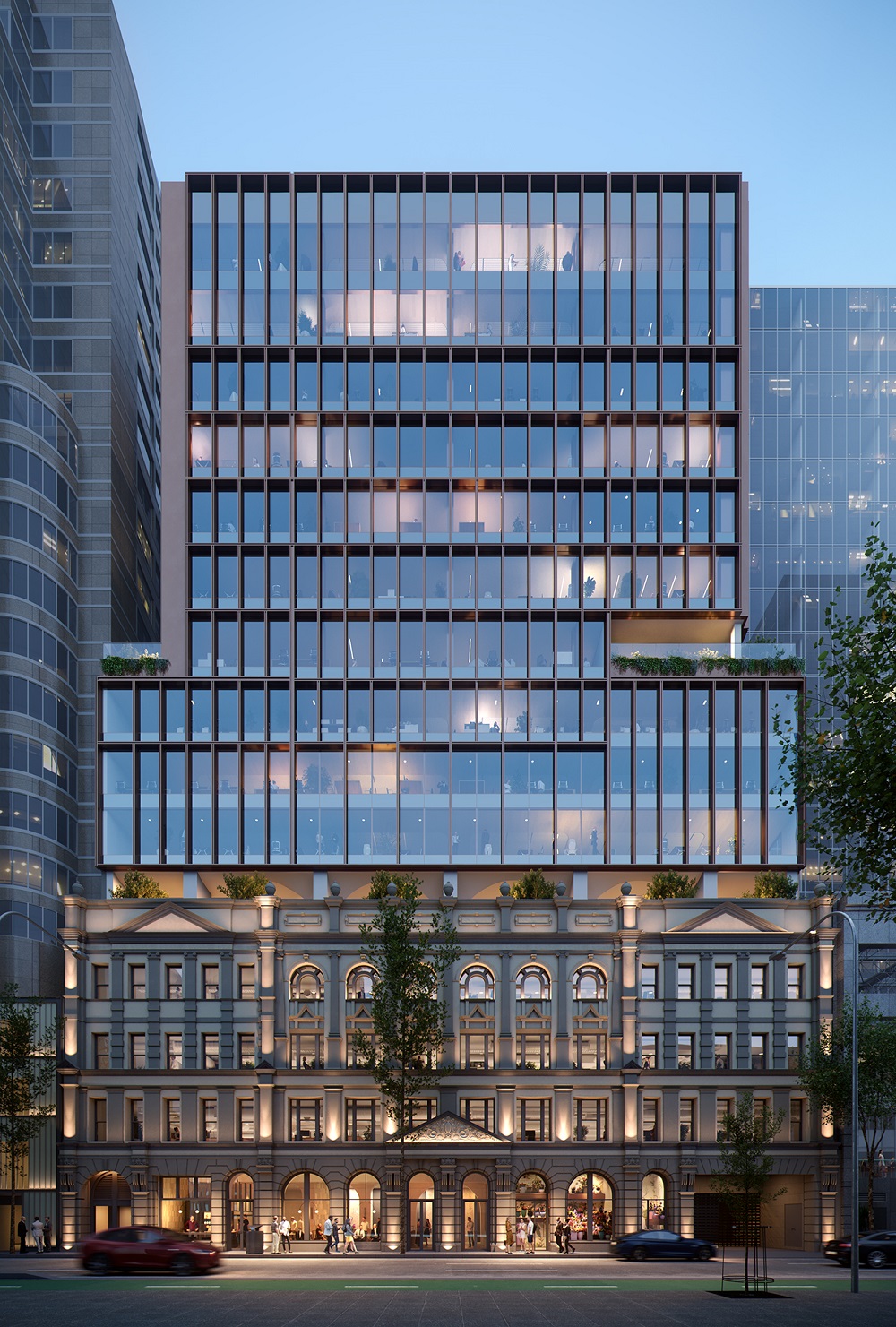 WMK has received DA approval from City of Sydney Council within 6 months for the redevelopment of 333 Kent St into an A-grade commercial office building with retail.

Principal Designer, John Andreas, says “this is a remarkable achievement for our client, Aretean and Bridge Capital.  There has been a number of recent developments in the area that have extensions over an existing building with podiums that pick up on the materiality & scale of adjacent heritage buildings and this site will sit comfortably with that urban context.”

The site is in Sydney’s most active commercial precincts near Barangaroo, Darling Harbour and Martin Place, and the proposed alterations pay homage to its original history as a warehouse & commercial building built in1889.

The four-storey warehouse was originally divided into four parts. This is reflected in the heritage façade. Each section occupied by separate tenants offering aspects of fashion, printing and book binding, retail merchants and import manufacturing. Tenants changed over the years until the central two sections were occupied by Tucker & Co, spirit and wine merchants in 1917. This central entry feature will be reused as the main entry and lift lobby for the building.

The original warehouse building structure was demolished during the 1984 redevelopment of the site. The warehouse façade was retained and pinned to the new 8 storey commercial building.

333 Kent Street is currently a commercial building with a small retail offering and the additional floors to the redevelopment will add an additional 5,000m² of commercial space to the site. Along with this the ground floor façade will be pushed out to Kent Street to reinstate the heritage façade glazing line. This realignment will allow for a large combined foyer, café and flexible work environment. A new end of trip facility will be located into part of the existing carpark behind the foyer.

The design strategy looks to extrude the floor plate up to the 55m height limit. The façade to the existing extension to both the east and west faces is to be removed and then reclad to match the new floors over, thereby unifying the existing & new built form. The new facades predominant vertical proportions with intermittent horizontal bands in bronze metal cladding picks up on the heritage façade’s composition giving both old & new a formal relationship that is currently absent. The existing façade will be repainted to reflect its Victorian heritage.

The alternations and additions of 333 Kent Street proposes to reuse and repurpose the existing eight storey building structure, including lift core and fire stairs. The carpark and loading dock will be retained with modifications for the new building services plant and storage tanks.