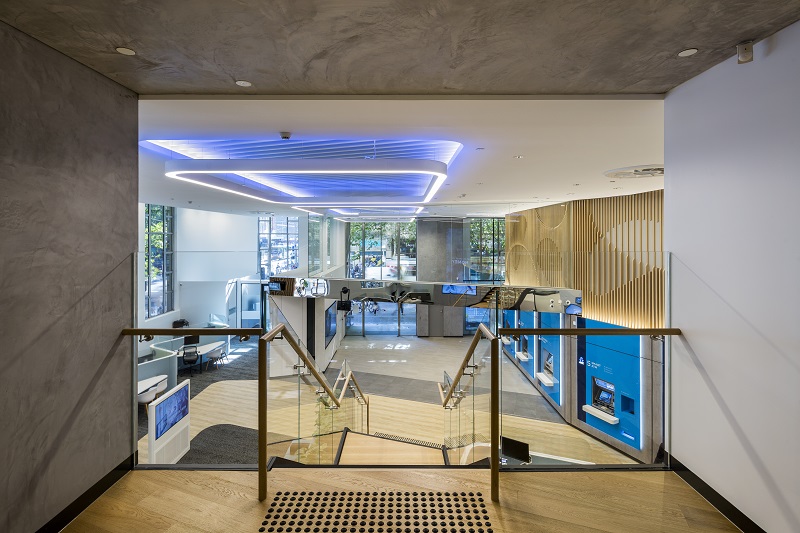 ANZ has occupied the historic Royal Bank building in some form since it was built in 1941 (Originally as E.S. & A.). Over the time since the space was last refurbished they have continued enhancing their retail offerings for their clients and prioritising collaborative retail engagements. To supplement these engagements, the challenge was to improve after-hours self-service access by creating purpose build spaces and leveraging cutting edge digital technologies.

WMK was engaged to design a vessel to allow ANZ to push their vision of the future of banking, involving breaking down traditional barriers between banker and customer.

Affectionately referred to as ‘Royal’ or ‘The Royal Branch’; ANZ was recently housing both retail activities and permanent regional admin office within the Royal Bank building. Though the regional admin office was due to be consolidated into a nearby commercial building, flexible spaces and agile methodologies are part of ANZ’s DNA and informed the creation of a collaborative multi-function space on the newly activated mezzanine level. This space is already being used for functions and seminars which enjoy a view of the banking chamber and Elizabeth and Collins streetscapes.

Though no internal heritage controls were in effect; WMK paid homage to the buildings recent internal forms highlighting some of the site’s history. The de-fit provided opportunities to reveal some of these elements and the intent was very much to tread lightly as we built the new space within them. Mimicking the gentle curves of the previous design, and juxtaposing it, the WMK solution incorporates contemporary curvilinear furniture elements with the modern technology of contemporary digital banking and collaborative spaces.